Unpleasant mistakes can happen quickly when growing tomatoes. But follow these points and you will soon be able to look forward to a rich harvest.

If you avoid the biggest tomato growing mistakes, nothing will stand in the way of a successful harvest

Juicy, aromatic, and with an enormous variety: Tomatoes are the absolute favorite fruit for many people. We’ll tell you about the biggest mistakes here, and how you can avoid them, so as to ensure your tomato growing efforts are met with success.

In principle, tomatoes are not very picky about the soil. However, they are extremely sensitive to heavy, poorly aerated soil, where harmful waterlogging can quickly form. It is therefore crucial that the soil is well loosened before planting the tomatoes. It is also advisable to spread 101 to 169 fl oz of compost per square feet and additionally work horn shavings into the soil. A humus-rich and nutrient-rich soil provides the best basis for the highly nutritious plants, which are very nitrogen-hungry, especially in the growth phase of the leaves and shoots. Caution: Tomatoes should be planted in a new bed every year. Otherwise, soil fatigue can occur, the plants grow puny and diseases spread more easily.

Ignoring the temperature, light, and air is another mistake when growing tomatoes. In general, tomatoes are warmth and light-loving plants that adore warm, (off) sunny, and airy locations. If you want to sow tomato seeds yourself you shouldn’t start too early: There is not usually enough light in February. It’s better to wait until the end of March or the start of April. And you shouldn’t plant them outdoors too early, either. As tomatoes are frost-sensitive, it’s better to wait until the winter frosts have passed and the temperature is at least 60.8 degrees Fahrenheit. 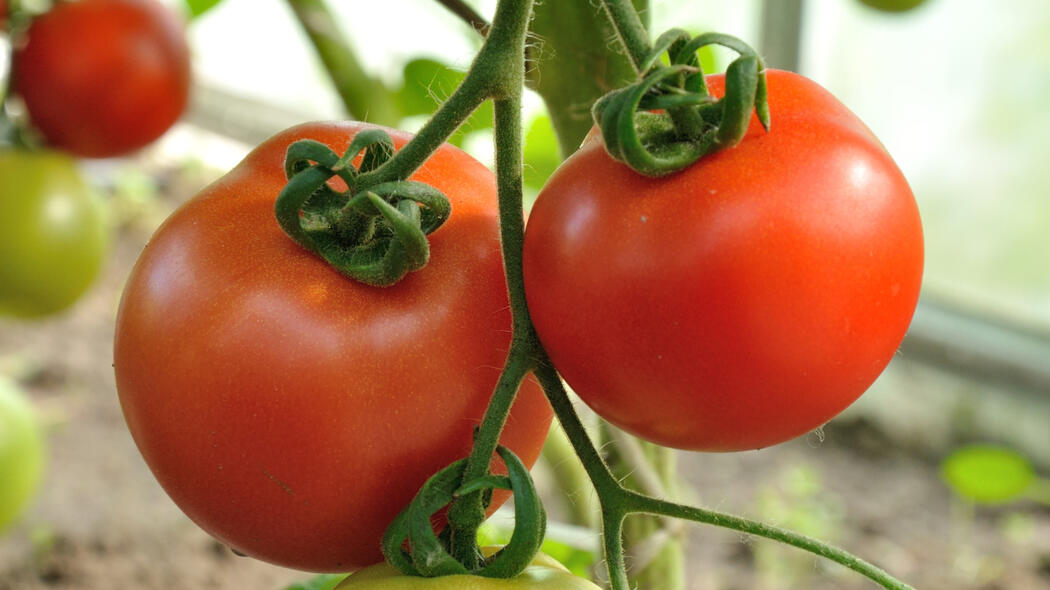 Here’s how to plant tomatoes in a greenhouse

You can bring forward planting by about four weeks with a greenhouse, film tunnel, or tomato house. The covered constructions protect the tomatoes against strong wind and rain. However, it is essential that you open the sides regularly: These means there is always a gentle breeze and temperature doesn’t climb above 95 degrees Fahrenheit. Because heat can also be harmful and lead to hollow, misshapen fruit. Moreover, leaves and fruit should dry out quickly after rain or frost so that fungal pathogens cannot propagate so quickly. And another important point: There should be distances of 23.62 inches between tomato plants, so that the fruit gets plenty of light and air.

These heavy uptakers not only need well prepared soil to be able to grow plenty of healthy tomatoes - regularly administering fertilizer is also important during the growth phase. Nutrients are mainly required as soon as the fruits are formed. Administering comfrey and stinging nettle manure is highly recommended every three to four weeks during the growth phase. Potassium and magnesium rich tomato fertilizers are also beneficial. Nitrogen enriched garden fertilizers are less recommended during fruit formation as they tend to promote leaf and shoot growth rather than fruit growth. A word of caution: Both a lack of nutrients and excessive nutrients can be problematic. This often leads to the leaves rolling up.

Unfortunately, there are also some pitfalls when it comes to watering tomatoes. You should water your tomatoes well straight after planting. If the plants have a clear growth spurt then they are usually well rooted. However, afterwards the tomatoes should be watered sparingly: The fruiting vegetable should only be watered if the plants have drooping leaves in the early morning. Tomatoes are usually over-watered - but they are able to form a large root system and even reach deeper layers of water. But, you shouldn’t wait too long either: If the soil is completely dried out, thin skinned tomatoes in particular will quickly burst. So you should frequently reach for the watering can in warm weather in particular.

You should only ever water tomatoes in the root area in order to prevent fungal diseases such as leaf and brown blight - ideally using a watering can or sprinkler. You can remove the lower leaves of stronger plants that are moistened with water as a precaution. Another tip for pot cultivation: Water drainage is critical for preventing waterlogging.

If tomatoes are left to grow untended they form long side shoots in the leaf axils over time - known as epicormic shoots. These side shoots generally only carry small fruit, particularly on stake tomatoes, and their large leaf mass often casts shade on other tomatoes, which in turn cannot ripen well. Regular epicormic shoot removal is critical for promoting health and fruit formation in tomatoes. Break off the epicormic shoots as early as possible, while they are still very soft. The shoots can be broken off most easily in the mornings and the wounds can dry out well throughout the day. Alternatively, you can also cut off epicormic shoots with a sharp, clean knife. It is advisable to remove epicormic shoots about once a week during the growth phase. If the main shoots become thicker and develop fruit they should also be bound to a supporting rod. In addition to removing epicormic shoots, pruning tomatoes also ensures that the fruit will ripen better and the plants will remain healthy.