Irises are diverse, like no other shrub, and enthrall us with their wide range of colors and shapes. Here are our tips for planting and care.

Irises from the iridaceae family are among the most diverse shrubs for the garden. Botanically, the genus is named after Iris, the Greek goddess of the rainbow - a fitting patroness given the wide range the flower colors. From small, fine-veined variants of the dwarf iris to the fulminant flowers of the taller bearded iris (Iris barbata), the spectrum is huge. Reason enough for the Association of German Perennial Gardeners to choose the Iris as "Shrub of the Year 2016".

There are over 200 species in nature, most of them grow in the temperate zone of the northern hemisphere. Breeders are particularly fond of the bearded iris group with its numerous hybrids and varieties. With white, yellow, orange, blue, pink, red and even almost black as well as multicolored varieties of flowers and plants in heights ranging from 5.90 to 43.3 inches, leave nothing to be desired. Varieties of the Siberian iris (Iris sibirica), the steppe iris (Iris spuria) and the graceful titlereticulated iris (Iris reticulata) make up additional important groups and complement with a whole range of botanical species.

The three-part flowers appear graceful on some irises and opulent on many. The early-blooming species exhibit flowers as early as February, most varieties from April, the later ones exhibit their blooms in July. Some species such as the meadow iris and the swamp iris develop conspicuous, cylindrical capsule fruits. Characteristic of all the species mentioned are the narrow, sword-like leaves that give them their name, which sometimes resemble grass. Irises have rhizomes or bulbs as storage organs, whereas the early-blooming reticulated iris forms small bulbs and is usually sold with other bulb flowers such as crocuses or daffodils.

MSG/Patrick Hahn
With their magnificent flowers, the bearded iris (Iris barbata-elatior) are the undisputed stars among the irises

Most species of irises do well in sunny places with nutrient-rich soil. A well-ventilated and moderately acidic soil is important. Bearded irises tolerate drought, so they can also be combined with species such as thyme and stonecrops in appropriate locations. In principle, a clay-rich, but well-drained soil in a warm, sunny place suits these irises best. The same applies to the steppe iris(Iris spuria), a sun worshiper — it does not tolerate moisture. The small reticulated iris (Iris reticulata) and some of its relatives are ideal for the rock garden, where they bloom early in the year. The dwarfs can also be cultivated well in pots, but you have to protect the pots from too much moisture, especially in winter. In contrast, the meadow iris (Iris sibirica) thrives in fresh (humid locations), while the swamp iris (Iris pseudacorus) even prefers the wet edge of the pond.

Along with the winterlings and crocuses, blue dwarf irises will beautify the spring bed

The rhizomes of the irises grow along the soil surface so that the upper third still sticks out of the ground. To make loamy soils permeable, you should loosen the soil and add sand. In addition, you can put the rhizomes on a layer of sand of thumb thickness. The ideal planting time is from August to mid-October, when the plants can still take root. Planting in November and spring planting in March are also possible. They can be planted in a pot all year round - except in winter. If you want to replant in flower beds, you need five to seven plants of the tall varieties (Iris barbata-elatior) for 10.76 square inches, and 12 to 16 plants should be expected for the lower Barbata-Nana varieties.

Wilted inflorescences should be cut back at the leaf base, then the shrubs does not put any extra effort in forming seeds. A number of iris varieties can even be encouraged to bloom a second time in autumn through consistent pruning, such as the white and apricot-colored “Champagne Elegance” or the purple “Lovely Again”. For budding in the spring, fertilizer should be used; a fertilizer with high potassium content is optimal. But the nutritional needs of the irises can also be met with mature compost.

If flowering subsides after a few years, large segments of rhizome should be cut with a sharp knife. To do this, take the rhizome out of the soil with a digging fork and make the cut at the constricting points. Each section should have a well-developed tuft of leaves and roots. The edge pieces are the most vital. After dividing the rhizomes, the leaves are shortened by about half. This will minimise evaporation until the plants are well rooted again. The best time for this is late summer. It is advisable to do this every three to four years, especially with large-flowered varieties, as otherwise they will grow old, become bare on the inner segments and slow down in flowering.

Many species of irises are winter-hardy and can easily overwinter outdoors. Species for moist to wet soils such as Iris sibirica are covered loosely with leaves and straw over the winter. In winter, irises in pots should be placed in locations that don’t get direct rainfall, for example under eaves on the house wall. Otherwise there is a risk of root rot in damp conditions.

Irises can be planted as herbaceous border over the pond edge in a rock garden or planting in pots. With its bright flower colors, the bearded iris is a magnificent perennial in the best sense of the word and refines every shrubbed. Classic partners are peony, delphinium, daylily and poppy. Low beard irises adorn the spring terrace as soloists in clay pots, while planting partners such as dwarf blue fescue and tulips skillfully set the stage in flower beds. The high beard iris goes quite well with lavender, or giant feather grass.

In spring, the 1.96 to 5.90 inches small dwarf irises lead the dance. The blossoms of the bulb flowers are slender and delicate in bright blue and purple shades. These include the varieties of the reticulated iris (Iris reticulata) and the small dwarf iris (Iris histrioides). The dwarf beard iris opens its buds from April.

The flowering time of the high beard iris and its varieties falls in late spring and early summer. The huge variety and the fascinating flowers make the heart of every hobby gardener skip a beat. These shrubs, usually over 3.28 feet high, bloom from May to June. Wild species such as steppe iris (Iris Spuria hybrid) and pale iris (Iris pallida) are a particular favorite of connoisseurs.

The breeding successes include bearded irises, which bloom a second time in fall: The "rebloomers" go through two flowering cycles a year. The Iris barbata-elatior “English Cottage” is one such reliable variety with white flowers and pale purple veins.

One of the popular irises is the native Yellow iris (Iris pseudacorus), (Iris pseudacorus), which is commonly known as the water lily. The Japanese Sword Lily (Iris ensate) is quite demanding, but it rewards the hobby gardener with magnificent, reddish-purple flowers. The very elegant , the wild species of which bears white flowers, is also suitable for planting in open spaces where the soil is not too dry. The Japanese iris (Iris Laevigata) with its pure blue flowers remains a bit more delicate and smaller. If possible, it needs a location on the pond. While most irises delight with their flowers, the Stinking iris (Iris foetidissima) is planted for its distinctive seed heads.

In principle, it is possible to propagate irises from seeds, but dividing the rhizomes is the simpler and faster way (see "Care tips"). In this case, the offspring are true-to-variety.

Unfortunately, snails and slugs do not stop at irises, but the degree of infestation is not as high in the locations preferred by most species: They are simply too dry. The bulbs of the reticulated iris and other onion irises are often eaten by voles. In principle, however, the perennials are not very susceptible to plant diseases.

What is an iris?

Irises from the family of the Iris family (Iridaceae) are popular shrubs for the garden.

Irises can be recognized by their three-part flower and their sword-like leaves. Irises reach heights between 5.90 and 43.3 inches, depending on the species and variety.

When can you plant irises?

Irises are best planted between August and mid-October. This allows the iris to take root before winter. Spring planting in March is also possible. By the way: They can be potted in plants all year round.

Many species of irises can easily overwinter outdoors. Irises, which prefer damp to wet soil, should be covered with leaves and straw in winter. Irises planted in pots should be kept in a sheltered place over the winter, for example under eaves on the house wall. 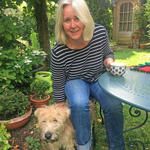