The small white flowers of Snowdrop often emerge as early as January, breaking through the snow cover and slowly heralding the start of spring. Delicate at first glance, the small bloomers are very robust and impress in a wide range of varieties.

Snowdrops have been known since ancient times and belong to the family Amaryllidaceae. The botanical name comes from the Greek: "gala" meaning milk and "anthos" meaning flower. This name refers to the flower’s color which is milk-white for all species and can be seen in late winter in the form of luxuriant carpets of flowers or individual flowers appearing above the melting snow cover.

The brown bulb, which is around 0.4 inches in size, produces a flower stem and usually three basal, linear, grayish-green leaves. At the end of the flower stem sits a single flower which is covered by a bract during the budding stage and stands upright. When it blossoms – usually in January or February – it frees itself and hangs down like a little bell. By the way: Snowdrops are poisonous – and this is true of all parts of the plant.

The Snowdrop is one of the first early bloomers, making it a valuable nectar source for bees looking to collect the first pollen of the new year

While in nature you can find mainly the Common Snowdrop (Galanthus nivalis), nurseries and specialty mail-order companies offer about 18 species and 500 varieties. They may look very similar from a distance, but on closer inspection the varieties are often very different: There are single-flowered varieties as well as double-flowered, fragrant, pure white, and those with subtle markings. The Snowdrop is now rarely seen in the wild and is therefore protected. Larger groups are usually found near former monasteries. They may have been cultivated there for religious reasons: There are many biblical stories that involve the Snowdrop.

The shoot tips generate heat as they grow and can even melt the snow around them. They are therefore known as "perce-neige" in France – meaning "snow piercer"

Snowdrops are great as wild plants under shrubs or on partially shaded lawns. Large clusters look particularly beautiful and add some variety when combined with other early bloomers like winter aconites (Eranthis hyemalis), crocuses, or cyclamen. Whether between ornamental shrubs, under trees, or on the edge of hedges, the graceful plants thrive without any problems. The delicate blossoms also look wonderful as cut flowers in a vase, although they only last a few days.

Snowdrops weave a delightful carpet of flowers with yellow winter aconites (Eranthis hyemalis). Choose locations that will be undisturbed for the rest of the year: Nothing drives away the bulbous plants quicker than constant care measures

Snowdrops prefer to settle under deciduous trees and between shrubs where plenty of light reaches the ground. Over time, the bulbous plants form large clusters in humus-rich, loose soils that do not dry out even in summer. The winter and early blooming species prefer locations in full sun, while the late spring bloomers, in particular the native species Galanthus nivalis, thrive in partial sun.

Whether under deciduous trees, on the edge of forests, or under shrubs: Snowdrops like loose soil

Snowdrop bulbs can be planted in early fall at a depth of 1.97 to 3.15 inches, with a distance of 3.94 to 5.91 inches between plants. There is no need to fertilize Snowdrops, as substrates that are too rich in nutrients tend to produce plants with green leaves but very few or no flowers. Sometimes the bulbs have already dried out too much at the time of purchase and do not sprout. It is therefore advisable to purchase connoisseur varieties as young plants in pots and plant them out at a later date. When choosing a location, it is important to consider that the bulbs retreat after flowering and react sensitively to soil tillage. You should therefore leave mowing and hoeing until May when the snowdrops have finished flowering.

Cluster of snowdrops in a forest clearing

Snowdrops are naturally propagated by ants: After flowering, the stems drop down, the ovaries burst open, and the ants get stuck into the seeds which have an appendage that they find tasty. This type of seed dispersal is called myrmecochory. If you want to propagate Snowdrops yourself, there are two options: The first is to sow the seeds in open boxes. However, it can take three to four years for the seedlings to flower. You can also propagate Snowdrops by division as soon as the leaves wither and flowering is over. Cut the large clumps into fist-sized pieces with a spade, just like with shrubs. Be careful not to damage too many leaves. The pieces can simply be replanted in the garden straight away. The divided Snowdrops will flower in their new location the following spring.

Snowdrops impress in a wide range of varieties. Amateur gardeners find it difficult to distinguish between the countless varieties. Besides the size and growth habit, it is the flowers that attract most attention. One amazing fact about Snowdrops: There are Snowdrop collectors and enthusiasts who are known as "galanthophiles".

The Turkish Snowdrop (Galanthus elwesii) is probably the most widespread species. It grows much taller than the native Snowdrop (Galanthus nivalis), the little crown of the large flowers has broad dark green stripes. The species "elwesii" also does well in dry and sunny locations. This Snowdrop rarely forms bulb offsets and should therefore be planted in groups if you want to achieve a "carpet effect". The species Galanthus caucasicus has a crescent-shaped green crown marking. Queen Olga's Snowdrop (Galanthus reginae-olgae) flowers in fall. Galanthus plicatus, a species that does not flower until late March, forms the biggest flowers. 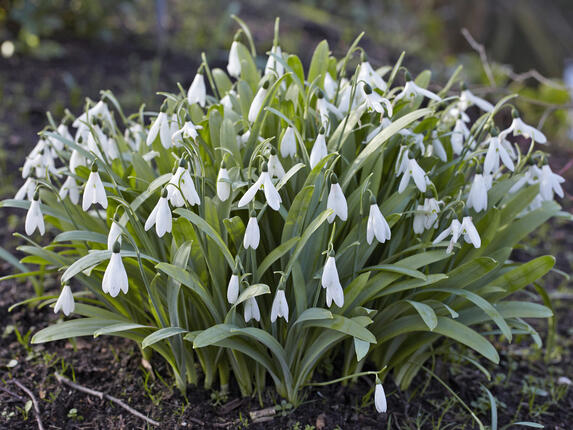 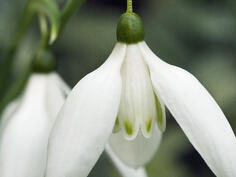 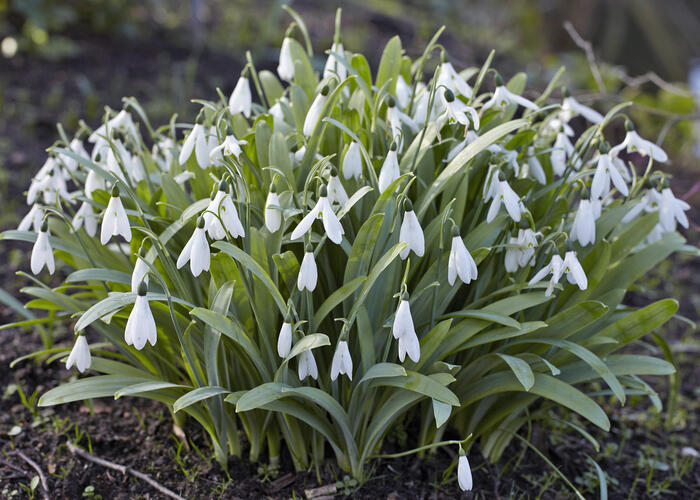 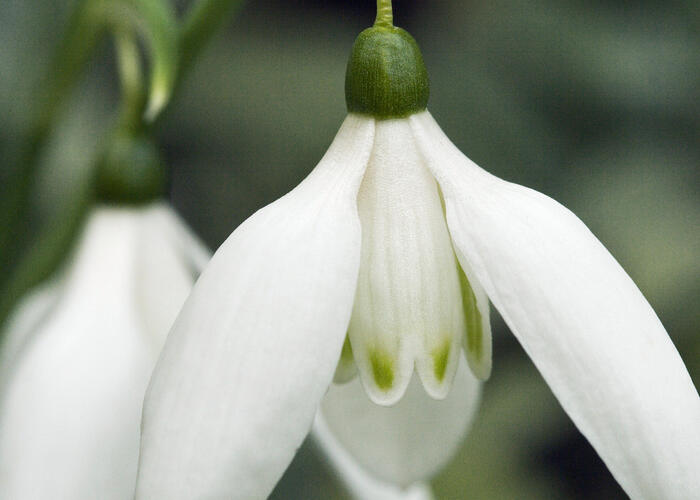 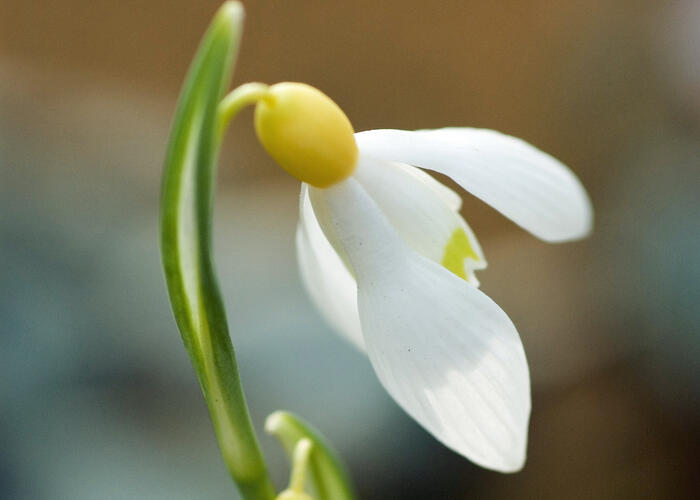 The easiest variety of Snowdrops to care for is ‘Samuel Arnott’ as it is very robust and fast-growing. The double flowered ‘Titania’ is a rare variety. ‘Flore Pleno’ (Galanthus nivalis) is a common double variety. ‘Hippolyta’ is also double-flowered: It has long tepals with green markings, which are surrounded by shorter green perigone flowers, grows around 5.91 inches tall and is very robust. ‘Mrs. Thompson’ usually has five petals rather than the normal three. And two flowers can sit on one stem. ‘Spindlestone Surprise’ flowers in February. Its delicate flowers have striking yellow ovaries. As the name suggests, ‘Maximus’ is a good variety for growing wild between ground cover due to its strong growth, it reaches a height of 15 to 18 inches.

The robust spring flower is occasionally affected by hoverflies and slugs. Snowdrops can also be affected by gray mold.