Hibiscus tea soothes irritated mucous membranes and can help to lower blood pressure. How to make the healthy tea yourself.

Hibiscus tea soothes irritated mucous membranes and can help to lower blood pressure. How to make the healthy tea yourself.

Hibiscus tea is also known as roselle tea, while in North Africa it is called "Karkad" or "Karkadeh". The easily digestible tea, which is made from the flowers of Hibiscus sabdariffa, is especially popular in North African teahouses. It is sweetened with sugar or honey, and often refined with ginger or mint. Cold hibiscus tea serves as a refreshment in the summer months. Due to its aromatic flavor and red color, many fruit tea blends also contain roselle tea. Useful information about the preparation and effects of hibiscus tea.

A tea from the African Mallow

Hibiscus tea is made from Hibiscus sabdariffa, part of the mallow species, and is also known as Roselle or African Mallow. It is a heat-loving woody shrub with prickly shoots. The plant can grow 6 to 10 feet tall. Its flowers, which are up to 6 inches long with three to five petals, are pale yellow with a bright red involucre. The mallow family plant originates from the tropics. Today, Hibiscus sabdariffa is primarily cultivated in Egypt and Sudan for tea production.

Hibiscus sabdariffa belongs to the mallow family (Malvaceae). Its petals are harvested and dried for tea

But it can also be grown in the United States: the annual plant from the mallow species can be sown in loose soil in a greenhouse or on the windowsill at 71 degrees Fahrenheit. Once the seeds have sprouted, you should prick out the seedlings into larger pots and keep them at a constant temperature of 71 degrees Fahrenheit. Water them regularly and make sure there is enough light. Once the flowers open, you can dry them and use them to make tea.

The deep red tea gets its color from the flowers of the hibiscus plant. The dried, dark red petals are sold loose at health food stores, drugstores and tea stores. To make your own hibiscus tea, you need a good handful of hibiscus flowers. Pour boiling water over them and let them steep for no longer than six to eight minutes – otherwise, the hibiscus tea will be too bitter! It contains citric acid, malic acid and tartaric acid, which give the tea a fruity and tart taste. The drink can be sweetened with honey or sugar. Hibiscus tea tastes great served both cold and warm.

The more intensely red the dried flowers, the more aromatic the taste of the brewed tea

Hibiscus tea has a soothing effect on irritated mucous membranes and airways. Many people therefore drink it for a dry cough or to alleviate a persistent tickle of the throat. It is also considered a mild laxative, but is just as effective when used for stomach complaints.

According to a recent study by Tufts University in Boston, USA, regular consumption of hibiscus tea can reduce the top number in the blood pressure reading (systolic pressure) by an average of 7.2 mmHg. This was proven during a trial in which a group of men and women with blood pressures of 120 to 150 mmHg drank three cups of hibiscus tea each day for six weeks, while a comparison group were prescribed a placebo beverage. The blood pressure value was only reduced by 1.3 mmHg for the group with the placebo. This effect is attributed to the phytochemicals of Hibiscus sabdariffa, including anthocyanins and flavonoids. Moreover, as the plant contains lots of Vitamin C, Hibiscus tea is also considered an immune system booster. It also has a positive effect on kidney function. However, drinking the tea during pregnancy and breastfeeding is not recommended. 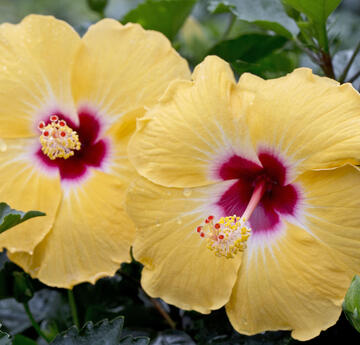 How to care for Hibiscus: 5 tips for the perfect blossom

Be it in the pot or the flower bed. This is how you overwinter Lavender